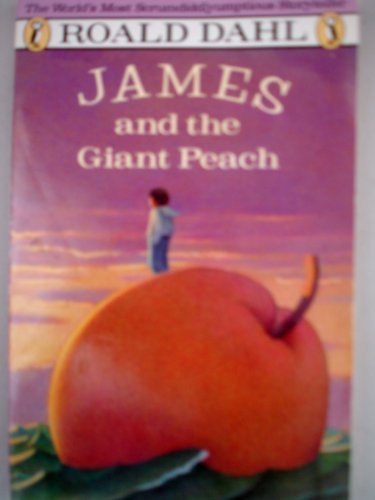 This story is about a boy who lost his parents and lives with his aunts. His cruel aunts troubled him a lot. One day as he was working an incident took place which changed his life forever. I found this book hilarious and it is worth a read for kids

James Henry Trotter loses his parents and has to live with his aunts, Aunt Spiker and Aunt Sponge who are really horrible. One evening, James find a giant Peach in the garden. He goes inside it and meets the old green grasshopper, the centipede and other insects. Together, they encounter a most exciting adventure ever. A wonderful book you'll surely love.

James and the giant peach, by roald dahl ia exciting and creative story .this story is basically about a boy called james whose parents have died and lives with his two horrible aunts who torture him day and night.it so happens that one day he meets an old man who gives him some seeds which have special powers.now in his backyard there is a peach tree and while walking he trips and falls and all the seeds get spilled .get absorbed into the soil and then......he encounters many funny incidents and at last achieves what he wnated since he was a child.

it is an awesome book.James and the Giant Peach is a much-loved children’s book written by the world-renowned Welsh author Roald Dahl. First published in the US in 1961 and the UK in 1967, the book’s rich imagery and amusing characters have made it a firm favourite of both children and parents for over 50 years. When poor James Henry Trotter loses his parents in a horrible rhinoceros accident, he is forced to live with his two wicked aunts, Aunt Sponge and Aunt Spiker. After three years he becomes "the saddest and loneliest boy you could find". Then one day, a wizened old man in a dark-green suit gives James a bag of magic crystals that promise to reverse his misery forever. When James accidentally spills the crystals on his aunts' withered peach tree, he sets the adventure in motion. From the old tree a single peach grows, and grows, and grows some more, until finally James climbs inside the giant fruit and rolls away from his despicable aunts to a whole new life… Roald Dahl wrote many excellent children’s books and James and the Giant Peach is up there amongst his very best. This brilliant and hugely popular story of James’s journey to New York alongside his insect friends is a joy for children to read and a delight for parents to read from. The book’s humour is always warm and the story is always engaging, providing a multitude of memorable moments.

Plot Protagonist James Henry Trotter, 4 years old, lives with his loving parents by the sea in the south of England, until his parents are killed by an escaped rhinoceros. As a result, James is forced to live with his two cruel aunts, Spiker and Sponge, near the White Cliffs of Dover. For three years, James is treated as a drudge, beaten for no reason, improperly fed, and forced to sleep on bare floorboards in the attic. One summer afternoon, after some of this mistreatment, James stumbles across a strange old man, who gives him the recipe of a magic potion which, when drunk, will bring him happiness and great adventures. On the way to the house, James spills the principal ingredients onto a barren peach tree, which then produces a single peach as large as a house. The aunts then sell tickets to neighbors for a sight thereof. When night comes, the aunts send James to collect rubbish discarded by the crowd; but he discovers a secret room inside the peach's seed, inhabited by a rag-tag band of human-sized, talking invertebrates (a grasshopper, centipede, earthworm, spider, ladybug, silkworm, and glow-worm), also transformed by the magic given him earlier. These then become James' companions in his adventure. Upon his arrival, the Centipede bites through the stem of the peach, whereupon it crushes Spiker and Sponge, and rolls through villages, houses, and a famous chocolate factory before falling off the cliffs at Dover into the sea. Hours later, near the Azores, the peach is surrounded by sharks. Using the Earthworm as bait, James and the others of the peach lure five hundred seagulls to the peach from the nearby islands, which they tie to the broken stem as a source of flight. Now airborne, the peach crosses the Atlantic Ocean. At once incident, the Centipede entertains the others with ribald dirges to Sponge and Spiker, but in his excitement falls into the ocean and is rescued by James. That night, thousands of feet in the air, the giant peach floats through mountain-like, moonlit clouds, where the protagonists discover the ghostly "Cloud-Men", who control the weather. As the Cloud-Men form hailstones to throw down to the world below, the Centipede insults them, and an army of Cloud-Men pelt the giant peach with hail. One Cloud-Man also pours a tin of "rainbow paint" onto the Centipede, briefly turning him into a statue before he is freed by a cloudburst. Later, the giant peach smashes through an unfinished rainbow, and one Cloud-Man almost boards the peach by climbing down the silken strings tied to the stem, which the Centipede severs to release him. Thereafter the protagonists approach New York City; whereupon the military, police, fire department, and rescue services are all called, and people flee to air raid shelters and subway stations, believing the city is about to be destroyed. A huge passenger jet flies past the giant peach, and severs the silken strings connecting the seagulls to the peach, which is then impaled upon the tip of the Empire State Building. The people on the 86th floor at first believe the inhabitants of the giant peach to be monsters or extraterrestrials; but when James explains his story, the people hail James and his friends as heroes. The remains of the giant peach are brought down to the streets, where it is consumed by the town's children, and its seed is established as a mansion in Central Park, wherein lives James, while his friends establish careers in the human world. In conclusion, James is said to have written the preceding story.

When poor James Henry Trotter loses his parents in a horrible rhinoceros accident, he is forced to live with his two wicked aunts, Aunt Sponge and Aunt Spiker. After three years he becomes "the saddest and loneliest boy you could find." Then one day, a wizened old man in a dark-green suit gives James a bag of magic crystals that promise to reverse his misery forever. When James accidentally spills the crystals on his aunts' withered peach tree, he sets the adventure in motion. From the old tree a single peach grows, and grows, and grows some more, until finally James climbs inside the giant fruit and rolls away from his despicable aunts to a whole new life. James befriends an assortment of hilarious characters, including Grasshopper, Earthworm, Miss Spider, and Centipede--each with his or her own song to sing. Roald Dahl's rich imagery and amusing characters ensure that parents will not tire of reading this classic aloud, which they will no doubt be called to do over and over again! With the addition of witty black and white pencil drawings by Lane Smith (of The Stinky Cheese Man and Other Fairly Stupid Tales and The True Story of the Three Little Pigs fame), upon which the animation for the Disney movie was based, this classic, now in paperback, is bursting with renewed vigor. We'll just come right out and say it: James and the Giant Peach is one of the finest children's books ever written. (Ages 9 to 12)

This a story of a boy James whose parent's have died and he lives with his two aunts. His aunts always troubles him.One day an old man gives him some magical seeds .James scatter those seeds and a giant peach grows bigger bigger and bigger.The one of the cruel aunt catches a sight on it and gets and idea. She and the other aunt exibits it and gets money. Once James go in the giant peach and lives with the insects in it. To understand the mystry adventure and fun everyone must read this fantastic book...

This boook was very funny and amazing.It was a bit interesting book by Roald Dahl. Roald Dahl is a great Writer and had written many books like The BFG, eiso trot and many more.He have a great imagination sense.His books are very famous books.Main character of this book was James and funniest characters of this book were aunt sponge and aunt spiker .They were very funny but were dominating James a lot.The story of this book goes that When young James Henry Trotter is orphaned, he must leave his pleasant home by the seaside and go to live with two cruel aunts, Sponge and Spiker, who treat him like a slave. One day, an old man appears, offering James a bag of crystals that he says will make marvelous things happen. The old man's magic causes a dead peach tree to grow a piece of fruit the size of a house, and that is the start of James' fantastic adventure.I loved this book. I would suggest this book to my friends and my aged cousins