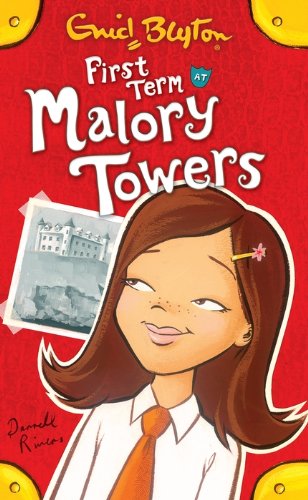 This book revolves arround Darell Rivers who is in her first term at Malory Towers, a boarding school. Enid Blyton has beautifully written about the ups and downs of her school life and it is worth a read

The book is all about a girl Darell Rivers. She is excited for her first day at Malory Towers. There she meets many new girls. She is sent to the room with many other girls. She meets all the girls and starts remembering their names. Their she meets Jean McDonald who is very sensible girl. Irene who loves music and maths. Now at Malory Towers everyone starts liking Darell. But there is a girl, Gwen who is becoming unpopular because of Darell's popularity. Mary lou starts to follow Darell as she likes her and tries to befriend her.Gwen pretends to be best friends with mary lou. Now, after all those fights Darell returns back home and promises everyone that she'll come back again.

This book was fabulous and an amazing one.I enjoyed a lot reading it.Author of this book is an amazing writer.Enid Blyton is full of great ideas and has written number of books which were fabulous.Malory Towers is a series of books and this is third one.Malory Towers i.This school,Malory Towers,The school,Malory Towers has 4 towers that are 4 storeys high. The kitchen, dining hall and common rooms are on the ground floor, dormitories are on the first and second floors, teachers rooms and storage are on the top floor. The school forms a square with a courtyard in the middle. The sides of the school are 3 stories high. Between the west and the north towers there are the classrooms. Between the north and east towers is the San and the headmistresses rooms. Between the east and south towers are the entrance, gym, assembly hall, labs and art room. Between the south and west tower are the mistresses rooms.The school also has stables, tennis courts, sports pitches and an outside, natural swimming pool.It is a fantastic school.Twelve-year-old Darrell Rivers is about to go to boarding school for the first time, and her new school is Malory Towers in Cornwall, which makes her even more excited. When she boards the school train, she notices that the two other new girls in her form and house are not easy to be friends with. There is Gwendoline Lacey, a spoiled only child who has never been to school before and only ever had a governess. The other new girl, Sally Hope, is unusually quiet and hardly speaks to anyone, and never talks about her home. This does not deter Darrell from making friends with the mischievous Alicia Johns and Betty Hill, her clever friend. This first term for Darrell is a hard one, for she first learns that if she joins in with Alicia's tricks in class she becomes behind in her work. Then when Gwendoline nearly drowns little Mary-Lou in the swimming-pool, Darrell slaps her and almost falls foul with the rest of her form. Whilst this school turmoil is happening, Darrell's mother writes to her, asking her to congratulate Sally about the birth of her little sister. Darrell does so, and Sally argues that she has no sister. At half-term, when Darrell's mother cannot find Sally, Darrell confronts Sally and pushes her to the floor in one of her violent rages. When Sally is sent to the sick-bay and becomes very ill, Darrell becomes worried and writes a letter to Sally's mother, explaining everything that she had done. However a wonderful surprise is in store, as she discovers that Sally had appendicitis and that her father (who is a surgeon) had treated her. After a long visit, Darrell and Sally become the best of friends, as she finds out that Sally had been jealous of her baby sister. Meanwhile, Gwendoline is still smarting from Darrell's slaps and is determined to get her revenge. She hides a large spider in Mary-Lou's desk and blames Darrell and Alicia for putting it there after it escapes during a French lesson. When this does not work, Gwendoline hatches a nastier plan by destroying Mary- Lou's pen and putting some inky shoes in Darrell's locker. Then it is up to Mary-Lou to find out who the real culprit is.It is a sort of fun,tricks,mischeifs and tragedies to happen.I enjoyed reading it.I would suggest this book to my friends.I loved this book!

ITS A GREAT GREAT..BOOK AND A WONDERFUL BOOK .My favourite book is actually is a collection: the Malory Towers books by Enid Blyton. It's all about Darrell Rivers, her sister Felicity Rivers and her friends, Sally Hope and Susan Blake. They go to a boarding school. In the first six books Alicia, Darrell's friend, does a lot of funny tricks but in the second six books June and Freddie do all the tricks at Malory Towers. My favourite trick was one June played on one of the French mistresses, where she had an empty pot of vanishing cream (which Amy had been using for her spots). She put the empty pot on Mademoiselle Rougier's desk and hid herself in the store cupboard, so that Mademoiselle Rougier would think that June had vanished. It was very funny. These books make me laugh and make me wonder what it would be like to go to a boarding school. They are my favourite.The story starts with Darrell Rivers, a girl who is about to start her first term at a boarding school known as Malory Towers.When she arrives, she is sent to the head, Miss Grayling, with some other new girls, who tells them that Malory Towers considers its "successes" girls who become dependable, loving and prove to be women useful to society.Darrell soon learns the names of the girls in her dormy. Jean MacDonald is a sensible Scots girl. Irene is a scatter brain but loves music and maths. She is also very clumsy. Mary-Lou is a quiet and timid little girl, scared of 'almost' everything. Alicia Johns is a cunning, smart and funny girl, known for entertaining the first-formers with her pranks and sharp comments. Gwendoline Mary Lacey is a selfish,mean girl, boastful of her ways as she has been spoilt by her mother and mistress. Sally Hope is a closed up girl and keeps herself to herself, with no interests. Katherine is the head girl and is good at it. Emily Lake is a quiet girl whose only real interest is elaborate embroidery and sewing. Violet is another girl in the form and doesn't feature in the books much.Darrell herself was the tenth girl in the dormitory. Darrell wants to be a success, but is distracted by Alicia Johns, falling lower in her place in class and playing tricks on the staff. However, things are still going all right for Darrell, which is not the same story for the other new girls, Gwendoline Mary Lacey and Sally Hope. Gwen is spoilt and not liked, while Sally is withdrawn and unfriendly. Darrell tells Sally that their mothers know each other, and isn't Sally's new baby sister lovely? But strangely Sally angrily states she has no baby sister, and she wouldn't want one either. Gwen envies Darrell's improving steps as Darrell is considered as a proper first-former whereas Gwen is teased because of her ways. A few chapters in we see Darrel's temper rise against Gwen.Gwen is not good at lessons or sports. Mary-Lou, a girl scared of everything, is held down in the water cruelly by Gwen, because Gwen, angry of being teased all the time, sees a moment of superiority in teasing her . Darrell seemingly 'rescues' Mary-Lou and gives Gwen a horrible shaking for teasing her.She even flares up at Katherine for not punishing people like Gwendoline and making sure that they learned their lesson. Darrell regrets her lose of temper and makes amends so the girls like her again, but Gwen is reluctant to apologise to Mary-Lou. Gwen is becoming more unpopular, and is jealous of Darrell. Mary-Lou suddenly springs up a complete adoration of Darrell, as she truly believed that she had been drowning. She follows her around everywhere and desperately tries to befriend her. Unfortunately however, this only ends up in annoying Darrell. Darrell wanted to take Mary-Lou out for half-term but she was going with Gwendoline and was too scared to tell Gwen that she wanted to go with Darrell. Next Darrell asks Sally if she would like to go out but she refuses. At half-term Darrell takes out the quiet Emily. Darrell sees Sally later that night. She says that Sally does have a baby sister, as her mother has just told her. Sally again denies it, the girls argue,Sally attempts to leave by giving Darrell a slight push but an angry Darrell pushes Sally,which results in her falling over the stool she was sitting on. When she lands in the corner of the room, she clutches her stomach saying "You wicked girl Darrell! You wicked girl!" The next morning Sally is in the San, seriously ill. Darrell is very worried as she thinks her push caused her illness. She prays for Sally and tries to keep updated on her health with constant questioning the teachers and matron. Late at night, a sleepless Darrell takes a walk, only to fall asleep behind some heavy curtains while hiding. She wakes up to her father's voice talking to Mrs. Grayling. She jumps out and hugs her astonished father. Things are sorted out when Darrell's father explains that he came to operate on Sally and says it was not Darrell's push that made Sally ill. She had, in fact, appendicitis and had